This is 170 video segments showing me actually creating the Nine Square Diagram Martial Art. This is a massive course. Let me explain exactly how it came about and what it is.

Many decades ago I created a course called ‘Create Your Own Art course. In that course I went over various foot patterns, including the Nine Square pattern. The Nine Square Foot Pattern was the result of a geometric progression. One uses a line, then a square, then four squares, and finally nine squares.

Over the decades I explored that foot pattern. Specifically, if you have done the Shaolin Butterfly you will have seen the Nine Square Foot Patterns. On the course after that, Butterfly Pa Kua Chang, I show how to mix footworks, and place the eight Pa Kua steps on the Nine Square.

Over the years I played with the Nine Square, did this and that, and had a pretty good time. Learned a little bit, too.

So many decades later I put out a Monkey Boxing course. In that course I took apart Monkey Boxing, I did this by filming 140 video segments. It was a massive undertaking. It took about a year to get the whole thing done. I simply met with a student every week and filmed and filmed, and finally it was done.

At that point I should have ended the course. I was done. But I didn’t feel like it. So I started matrixing Tai Chi Chuan. The guys taking the course seemed to like it, so I kept doing it.

Now, I have actually matrixed Tai Chi. I isolated certain moves, put them on a matrix, and it was pretty good. But I wanted to do more, to go in depth. I wanted to take it al-l-l the way apart.

So I filmed 170 segments. In these segments I took my student through the Matrix of TCC techniques. There were 100 specific techniques based on the matrix, plus methods of freestyle, important points to be learned, and so on.

The course took nearly two years to film, and in it I demonstrate how you matrix Tai Chi techniques, and then I teach the applications.

To be honest, I had never done this before. I had talked about it, done a little bit, I had done this with Karate, and with Kung Fu, but I had never gone into Tai Chi so deeply and so thoroughly.

As I was doing this I realized the same old things. TCC is top heavy. TCC is obtuse. TCC has all sorts of problems: there are blank spots, certain moves have no applications, and so on.

So when I was done I condensed everything. I created the Nine Square Diagram Boxing Course. It was short, sweet, covered absolutely everything. Included modular concepts from Pa Kua, meditation from Tai Chi Chuan, the workability of Karate, concepts from Kung Fu…everything, all arts were encapsulated and brought together.

if you do the Nine Square Course you can do martial arts better than anybody. There are no blank spots, there are no illogical moves, the thing is completely matrixed.

If you do the Nine Square R&D course then you see how it was actually constructed. You will understand the martial arts better than anybody.

If you do the Nine Square R&D course you will actually be in on the very creation of it.

The price $350, which breaks down to about $2 per video, which is amazing inexpensive.

Here is the button for the full course… 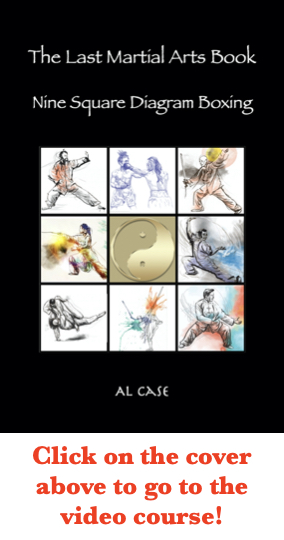